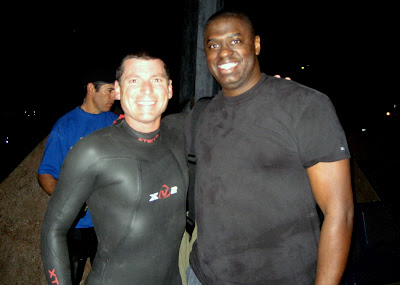 About 5:05am race day morning, in the pitch dark of pre-dawn, Kelvin somehow found us.

Kelvin had driven all the way out to Tempe, about 6 - 7 hours, and was there to support me for the entire race day. He arrived at the venue around 4:50am and never left the area until after he had personally packed my gear into my car and saw that my family and I were settled and ready to go, somewhere around 10:00pm post-race.

He was there at every turn of the entire event, from getting me set-up race morning, to the moment I exited the swim to all the turns in the bike race and the run.

He was even there at the finish line and had arranged to have Connor run the last 200 yards with me. He also put some motivational messages for me up on the electronic board so that every time I ran by, it triggered a message to stay focused, keep at it, stay motivated. Those little electronic messages were important at miles 7, 16 and 23 of the marathon!

How do you thank a friend like that? Words cannot express the gratitude.

Kelvin and I go way back to the mid-90s, when as an executive of the Franklin Quest Organization, he helped me organize a very large organization, dozens of projects and lots of ideas that I didn't really know what to do with. He was so successful at getting me organized and dramatically more effective, that I did everything I could to lure him away from Franklin and come to work for me. He finally relented and those were some of the greatest and most productive years of my banking career.

Today, Kelvin is back at his former company, now called the Franklin-Covey Organization, and he is one of their most successful professionals, maintaining accounts, selling new ones and ensuring that executives have every possible tool and technique available to be their most effective while focusing on what matters most.

During our years together as Kelvin was pursuing an advanced degree at night, he served an internship with the Ironman organization; this was in the late 90s and at that time I didn't quite understand what he was doing with his weekends and at those crazy events. I thought those Ironmen were super-human and frankly, on the lunatic fringe. How anyone could ever do one of those events was beyond comprehension. Kelvin was the very first person to introduce me to Ironman, probably just over 10 years ago.

I have Kelvin to thank. Some would say, to blame. But not me! I loved the journey to this point.

I only wish that others could know the very deep sense of satisfaction and pride that comes when you have a true friend like Kelvin Shields.