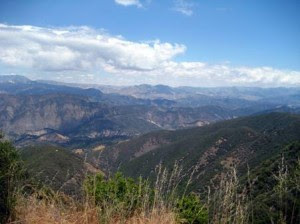 This is the typical view we faced when looking down into the canyons and the distant mountain peaks we'd be climbing in the inaugural Blue Canyon Ultra Endurance Run in the Santa Ynez mountains in the Santa Barbara back country.

This was by far, the toughest event of my short ultra endurance career. Many times I felt like just turning around and quitting. What was supposed to be a 50K/31 mile event was actually a 34 mile event, and in my case, was much closer to 40 miles due to inadequately-marked trails (or more likely, my ignorance at following trail markers). The event was made even a bit more challenging in that I had ridden my bike the 110 miles from Long Beach to Carpinteria just the day before.

The race was difficult due to the extreme elevation gains as well as the overgrown single-track trails that were heavily-laden with Poison Oak. It was extremely difficult to see the trail that we were actually running on, so foot placement was extremely technical in about 5 - 8 miles of the race.

But there was no denying that this was a tremendous venue and incredibly beautiful back country that few people have ever witnessed first hand.

So I was ready to go at the start line, not really knowing what to expect, but as usual, I was ready for anything and everything that could come my way (it's the Eagle Scout in me...Always be Prepared!). Immediately off the starting line we started going uphill and I noticed that my calves were really burning within the first 10 minutes or so. I looked down at my Garmin 305 and noticed that we were running at a very fast clip, and uphill to boot. At that point I pulled over and let the faster runners go right on by. I still had at least 32 miles to go.

Within the first five miles or so, a group of us missed a hard-left turn off the fire road onto a single track trail. Instead, we blindly followed one another up a very steep section of fire road for at least 1.25 - 1.75 miles. We were turned around toward the top of the hill and given the bad news. It would not have been so tough to take, but for the fact that it was ALL uphill.

We found our way to the single track trail and I was shocked at how overgrown it was. If not for the markers placed by the Race Director and his crew, we may not have been able to find our way. There were spots where we absolutely could not see the "trail" we were supposed to be running on because the brush was so overgrown.

To my great fortune, a very experienced and accomplished trail runner of national renown gave me plenty of tips and advice along the trail. She was pacing out her day to do the 50 mile event and I was only doing the 50K so we were somewhat evenly paced. Sheri Okamoto and I ultimately ended up running together for close to 10 hours that day. There were MANY times when I told her to just run ahead and not hold back for me, and there were other times when she talked me out of dropping out and of declining the two invitations to hop a ride back with the other runners who had called it a day at the half-way point.

I'm grateful that Sheri encouraged me to stick with this event, even though it was really a very tough, long day. It took me 11 hours and 10 minutes of running, walking, jogging and bush-whacking to finish that event. Four days later, I can still hardly walk!

But overall, it was a beautiful location and a great confidence booster, one that I really needed.

I have two big events coming up and I needed a test to monitor my progress. Blue Canyon was that test.

Darwin Holt has so graciously offered me the once-in-a-lifetime opportunity to be his pacer for the last 38 miles of the Western States 100 mile ultra endurance run. This is likely the world's most prestigious and famous, and certainly the original 100-mile trail race. I am profoundly honored to pace my good friend Darwin, and I take this responsibility VERY seriously. He is counting on me and I don't want to let him down. So this was a good test. And actually, I think that Blue Canyon was a bit tougher than what I will face at Western States in just a few weeks.

The other big event, my A-Race is the Ultraman in August. That event will require a 53-mile ultrarun on the 3rd day of the race, and doing the Blue Canyon at about 36 - 38 miles was a good warm up, not necessarily in terms of trail running, but in terms of spending over 11 hours on my feet making constant forward progress toward a long distance objective. My Heart Rate stayed remarkably stable through the race which demonstrates to me that I am learning to be disciplined and to manage my resources for the long haul ahead.
Posted by John Callos at 6/10/2009 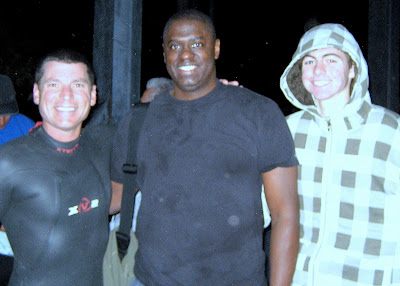 My luck and good fortune continues with the addition of my Ultraman Crew!

This photo was taken in November 2008 at about 5:30 am, just before I entered the chilly water of Tempe Town Center Lake for the Ironman Arizona race. That's my son Connor and my great friend, Kelvin Shields.

I am so glad to have my 16-year old son Connor to be on my crew. Connor will be assisting our Crew Captain, Kelvin Shields. Those of you who read my book, Iron Ambition, know all about Kelvin and how he has been a big part of my professional life and an ardent supporter of my ultra endurance ambitions. Kelvin has completed the Ironman 70.3 and multiple marathons. So Kelvin can relate to what I will be going through and that's really important.

Kelvin is not just a dear friend, but he is also an exceptionally well organized person, a great athlete, he loves to plan and most of all, he is trained in emergency medicine, which is reassuring. Kelvin is scrambling to get everything in order for our trip to Penticton, British Columbia, Canada and is talking with Darwin Holt about what it takes to be a great crew chief.

We have secured all the plane tickets, the hotel rooms, the Crew Vehicle. We need passports to enter Canada and are getting those updated as well. At this point, with only seven weeks remaining we are focused on learning as much as possible about how the crew can assist me through each leg of the three-day event. We will arrive in Penticton on Wednesday July 29th and return on August 5th.

My biggest concern is to just finish each day within the 12-hour cutoffs. Connor will make sure I am well hydrated and eating and Kelvin will navigate from our Crew Car / Support vehicle and make cetain that I am staying within a safe band of time that will insure I finish prior to the cutoffs, but not so quickly as to risk burning out later that afternoon or the next day.

Having Kelvin worry about the cutoffs is likely the most important thing of all for me because my mind will not be constantly racing making calculations about what it will take to finish under the wire every day.

My biggest concern used to be the bike, and still is. But my confidence is gaining rapidly that I can complete the 170 miles under the 12-hour cutoff.
Posted by John Callos at 6/08/2009