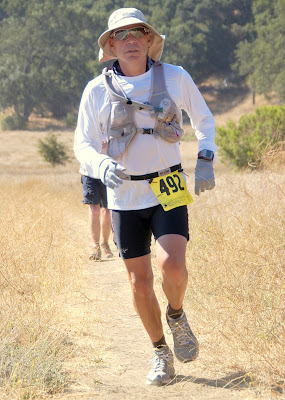 This was the most extreme test of endurance and will power that I have ever experienced.

The Bulldog Ultra marathon course winds through the mountains between Malibu and Agoura, with a combination of hiking trails, dirt paths and fire roads. There are two stream crossings, but we were able to hop on rocks and avoid getting our shoes wet.

The hardest part of this event was not the distance at all- - -in fact, I could have gone much further if it were on level ground! The hardest parts of the day were the impossibly-steep descents.

One might think that running down the face of mountains would be a lot easier, some might say 'effortless' just letting gravity do its work. But the painful reality is that when the road gets too steep, every step is a painful, toe-jamming, knee grinding torture test... At least for me.

The extreme decent in elevation was very difficult. By far, maybe a measure of two to three times, this was much more difficult than the Ironman 70.3 events. It wasn't even close.

This was not a test of endurance, but rather a test of willpower and smart hydration, electrolyte intake and fueling. As the temperature was in the mid 90s, the heat had a major impact. But most challenging for me were the extreme descents.

The constant jamming and pounding of the downhill run was just too much on these old knees. It is also high risk for slipping on loose dirt/gravel as well as the dreaded "black toenail" from the toes repeatedly slamming the front of the shoes.

Despite my ample study and preparedness, I was not expecting so much pain from the downhills. I was well prepared and had every conceivable potentiality covered. As an Eagle Scout, I am always prepared, but in this case, perhaps too prepared. I was quickly spotted as a 'newbie' due to the size of my hydration pack which was bulging with my "eleven essentials," a 2-Liter hydration pack, a full medical kit, full nutrition kit, Electrolyte capsules, extra hat, poison oak remedy, sunscreen, toiletries, etc. I was fully prepared for everything. Everything except the steep downhills!

I will not do this race again due to the extreme physical toll the descents took on my knees, toes and especially my quads. The 31-mile distance was not the issue, it was the steep declines.

I am far more likely to do a 50-mile race than to repeat the Bulldog 50K. So now my goals are fixed solidly on finding a 50-mile race to complete sometime after the Tempe Full Ironman in November 2008.

I really enjoy these ultra marathons and "extreme" endurance events, but in the future I will be much more careful about selecting events that do not involve such steep downhills; I would much prefer uphill courses or rolling hills. Another lesson learned is that I must get the weight of my hydration pack down a bit. Perhaps carry more water on a waist belt system and only carry the bare essentials on my back. The constant jostling of about 10 - 12 pound on my back over 7.5 hours took a toll on my shoulders.

While I cannot compete with younger men and women in terms of speed, it seems that these ultra marathon and ultra endurance events are a great equalizer because speed does not play as vital a role as does endurance, hydration and on-the-trail nutrition.

As long as I can stay injury-free, I think that these ultra marathons and extreme endurance events are going to be my focus. I really do enjoy these crazy events that seem impossible to contemplate.

The more extreme, the more interesting and exciting they are to me. Also, I have noticed that the extreme events do not attract as many people as the Ironman 70.3. In the Bulldog 50K there were only about 150 or so participants. People were friendly and helpful. These events are not about extreme competition, but rather, a brotherhood of mutual respect and sincere appreciation for just finishing.

In these extreme endurance events, anyone who just manages to finish is a winner. I think I've found my niche.
Posted by John Callos at 8/24/2008