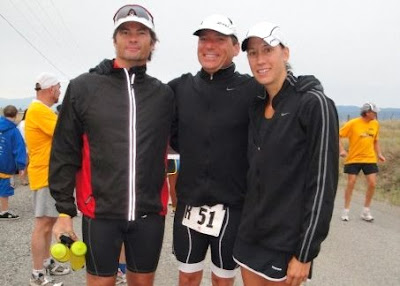 Darwin Holt, me and Barbi Brochu at the start of the 52.4-mile double marathon, the third day of ULTRAMAN Canada. Barbi set a new world record for the 6.2 mile swim and shattered the prior women's record for the overall event. And Darwin is one of only a handful of athletes in the world who has completed the ULTRAMAN event in both Canada and the World Championship ULTRAMAN in Hawaii!


In March 2009, the reality of the daunting task of training for the ULTRAMAN hit me hard. Reviewing the credentials of those athletes who had been invited to compete at ULTRAMAN was incredibly intimidating because they had achieved so much and many were literally world-class athletes. I seriously doubted my ability to complete this event.

Both Darwin and Barbi contacted me completely out of the blue and were very encouraging from the start. These two heroes are responsible for me toeing the line at ULTRAMAN more than anyone else, and for that, I am deeply grateful.

In April, I nearly gave up this crazy ULTRAMAN dream altogether, but Darwin pulled me back. I had just completed the CA Ironman 70.3 and had a truly miserable day. The worst ever. I could barely complete the event, and in less four months, I would have to go 4.5 times that distance for ULTRAMAN. I sent Darwin an email and said, "Forget it. NO way I can do ULTRAMAN, I cannot even do this 70.3 event without nearly dying."

Three minutes later, the phone rings with a gentle soothing Canadian telling me that I CAN and that I WILL complete ULTRAMAN.

Darwin believed in me when I did not believe in myself. He helped me improve my confidence and then set out to custom-design a training regime like none other. In fact there are no training plans available anywhere on what or how to train for ULTRAMAN, so Darwin built mine from his own experience and his extensive ultra endurance background. We exchanged perhaps hundreds of emails and he got me ready both physically and mentally for the challenge.

But I saw another side of Darwin in the last 1.5 miles of ULTRAMAN.

I had severely hurt my foot at mile number 7 of the run and had 45 more miles to go. I believed that the foot was broken. The pain was excruciating. Every step it got worse and worse. But strangely, it was less painful to jog slowly than it was to walk. So I kept at it, but over time it became unbearable and reached a crescendo just before the finish line.

I lost the will to fight any more. I cannot explain it, but I did give up. I just could not take it anymore. By favoring the other foot, my bio-mechanics were all screwed up for 45 miles. This caused severe hip pain in the other leg. I was a mess and in extreme pain.

Out of nowhere, Darwin shows up.

He was calm at first, but that didn't last long. He would not hear of my complaints, he would not tolerate my yelps, my whincing, my grunts or my crying. None of that mattered now.

All that mattered was that he get me across that line under my own power.

He yelled at me. He was extremely serious. The nice, soothing, reassuring, calming influence and voice was gone. He shook me to the core by raising his voice and somehow shook me out of my stupor of pain to regain my focus. Miraculously, we crossed the line together, with literally just minutes to spare...I BARELY made the 12-hour cutoff and I owe that final push and final finish to Darwin.

My sincere thanks to Darwin and Barbi for pushing me and encouraging me. While I owe my ULTRAMAN start to them both, I owe my ULTRAMAN finish to Darwin. He got me over the line when I had lost my will and my fight to continue.
Posted by John Callos at 8/09/2009